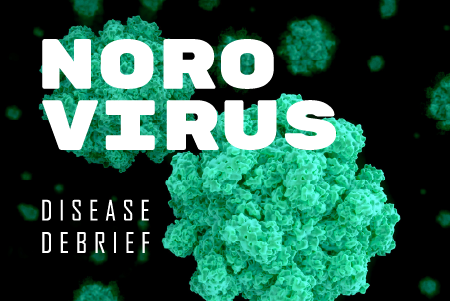 This debrief was prepared by Shyama Nanayakkara. Questions, comments and suggestions regarding this debrief are most welcome and can be sent to nccid@umanitoba.ca

What are the important characteristics of Norovirus?

Norovirus is a type of single-stranded, non-enveloped RNA virus known as “Norwalk-like viruses” (NLV), after the first outbreak in Norwalk, Ohio. Because of their morphologic characteristics, they are also known as Small Round Structured Viruses (SRSVs). They are members of the Caliciviridae family. Noroviruses have a slightly smaller diameter than other viruses in the Caliciviridae family, measuring about 27 nm. The virus’s edges are not well defined when viewed under electron microscopy.

These viruses are further classified into six genogroups (GI-GVI) based on the sequence of the major capsid protein, with only three (GI, GII, and GIV) known to cause human disease. Among these, genotype GII is the most common in humans, accounting for 95% of all infections. (GV infects mice; GIII infects cattle.) Within these three human genogroups, more than 25 different genotypes have been identified, and new genotypes replace the circulating dominant type every 2-3 years due to recombination and antigenic drift.

The incubation period for norovirus infections is 12 – 48 hours, but symptoms usually appear within hours and can begin as soon as 12 hours after being exposed to the virus.

The most common symptom of norovirus infection is a sudden onset of gastrointestinal illness caused by stomach or intestine inflammation. It can cause neurological symptoms in addition to acute gastroenteritis, with the most common symptoms being diarrhea (watery, non-bloody), vomiting (more common in children), nausea, stomach pain, and cramping. Fever, chills, headache, body and muscle aches, and fatigue are some of the other symptoms.

The symptoms of norovirus infections can be severe, and people may feel extremely ill, particularly in older adults, children under the age of 12 months, and immunocompromised individuals. Fever is more common in these people, and the illness can last for several days. Diarrhea and vomiting can occur frequently throughout the day, resulting in dehydration, fatigue, and weakness. Dehydration is the most common complication requiring hospitalization and intravenous fluid treatment.

Norovirus is usually diagnosed on clinical suspicion in a patient with acute onset of vomiting and/or watery diarrhea. The likelihood of norovirus is higher in the setting and outbreaks of Norovirus illnesses have a distinct winter seasonality.

Confirming the diagnosis with stool testing is generally not necessary, although it may be useful in immunocompromised patients with severe or persistent symptoms.

The virus is commonly identified from stool or vomitus specimens of infected individuals but can also be used to identify from environmental surfaces.  Diagnostic methods for norovirus focus on detecting viral RNA (genetic material) or viral antigen.

RT-qPCR assays based on TaqMan detect the virus’s RNA. Norovirus can be detected in stool, vomitus, food, water, and environmental samples. RT-qPCR assays are the preferred method for detecting norovirus because they are highly sensitive and specific. They can detect as few as ten to one hundred norovirus copies.

Several commercial platforms for detecting multiple gastrointestinal pathogens have recently become available. Noroviruses of genogroup I and genogroup II are among them. The sensitivity of these assays for norovirus is comparable to that of RT-qPCR.

There are also commercial enzyme immunoassays (EIAs) that detect norovirus antigen in stool samples. However, due to their low sensitivity (50 to 75%), these kits are not recommended in general.

There is no specific treatment for norovirus-induced gastroenteritis. Typically, the disease is self-limiting. Without specific medical treatment, most patients begin to recover on their own after 1-2 days. The treatment is supportive and includes fluid replacement. Patients should drink plenty of fluids to replace fluids lost from vomiting and diarrhea, and electrolyte disturbances should be corrected with oral rehydration fluids or intravenously in severe cases of dehydration.

Norovirus has been the leading cause of acute gastroenteritis outbreaks around the world since 2002. A highly contagious virus that most people will contract five times in their lifetime. Hospitalization and death are the most serious consequences of the disease, and they are far more common in children and the elderly, as well as in low- and middle-income countries. In addition, it is a common cause of endemic diarrhea.

Norovirus is responsible for one out of every five cases of acute gastroenteritis (inflammation of the stomach or intestines), which causes diarrhea and vomiting around the world. Each year, an estimated 685 million cases of acute gastroenteritis are caused by norovirus. Annually, approximately 200 million cases are seen among children under the age of five, resulting in an estimated 50,000 child deaths, the majority of which occur in developing countries. Norovirus kills over 200,000 people each year and costs the global economy more than $60 billion.

Norovirus illness can occur at any time of year, but outbreaks are more common in colder climates during the fall and winter months. The illness is easily transmitted in crowds, such as schools, hospitals, childcare facilities, nursing homes, cruise ships, and passenger trains.

Human feces and vomit are the primary reservoirs for norovirus. Norovirus spreads through close contact with infected people, contaminated food or water, or contaminated surfaces or objects.

Noroviruses can withstand relatively high levels of chlorine as well as temperatures ranging from freezing to 60 degrees Celsius. Temperatures of 71.3 °C for 1 minute kill noroviruses. It can survive at pH 2.7 for at least 3 hours. UV radiation may have an intermediate effect.

A person is most contagious when they are sick and for a few days after they recover. Norovirus infections are most contagious during the acute stage of the disease, but people can continue to shed the virus for 2 to 3 weeks afterward. Some people who have been exposed to a norovirus infection may be asymptomatic; however, they may still shed the virus and spread the illness. Transmission requires only a small inoculum (100 viral particles), and asymptomatic individuals can shed infectious virus particles for up to 3 weeks after exposure. In immunocompromised people, viral shedding in stool can last for months after infection.

Food contamination has been the root cause of the most recent outbreaks. Because of Norovirus contamination, several food items have been recalled. Some foods like shellfish, particularly oysters and prawns as well as many fruits and vegetables can be contaminated at their source before they are harvested by sewage contaminated waters.

Drinking and recreational waters can also be contaminated with norovirus and lead to waterborne outbreaks.

Anyone can become infected with the norovirus and become ill. Because of the many different genotypes of noroviruses, norovirus illness can occur multiple times in a person’s life and being infected with one type of norovirus does not protect against other types. Furthermore, because immunity fades quickly, one can be infected with the same genotype more than once. Furthermore, a person who becomes infected after consuming contaminated food or water can pass the virus on to other members of the household through direct contact or by touching and contaminating objects and surfaces.

Although norovirus can spread through the ingestion of aerosolized vomit, there is no evidence that people can become infected.

Norovirus infection is highly contagious, and anyone can become infected more than once. To help prevent getting infected or infecting others:

There is currently no vaccine to prevent norovirus infections, although several vaccines are in development.

According to the Public Health Agency of Canada, approximately 4 million Canadians become ill as a result of the food they consume each year. Annually, norovirus causes more than 1 million cases of non-travel-related foodborne illness.

Norovirus outbreaks must be reported on a national level. Any outbreaks that meet the national outbreak case definition should be reported to the federal government. Canada uses surveillance systems to monitor outbreaks of norovirus.

CDC-Reporting and Surveillance for Norovirus

Two or more unrelated cases of illness compatible with norovirus that can be epidemiologically linked to one another.

Two or more cases of clinical illness compatible with norovirus that are epidemiologically linked in an institutional setting.

In Canada, outbreaks of norovirus are nationally notifiable since 2007.

What is happening with current outbreaks of Norovirus?

Between mid-May and late-May 2022, the provinces of British Columbia (18), Alberta (12), Manitoba (19), and Ontario (11) reported 60 cases of norovirus and gastrointestinal illness. Although people became ill, no deaths were reported. Despite the fact that not all illnesses were tested, laboratory tests confirmed the presence of a norovirus infection. The consumption of spot prawns, according to the investigation’s findings, was the source of the outbreak. The Canadian Food Inspection Agency (CFIA) issued food recall notices for several lot codes of spot prawns linked to the illnesses.

PHAC-Outbreak of norovirus and gastrointestinal illnesses linked to spot prawns

What is the current risk for Canadians from Norovirus?

Norovirus outbreaks are common in Canada, so being exposed to or infected with norovirus is not uncommon. Norovirus causes more than 1 million cases of non-travel related foodborne illness each year. Outbreaks can happen anytime, but they occur most often from November to April. Most outbreaks occur in settings where people are in close contact, such as:

What measures should be taken for a suspected Norovirus?

If you suspect you have norovirus (acute gastroenteritis), contact your healthcare provider. Norovirus can cause vomiting and diarrhea several times per day. This may result in dehydration (loss of fluids). Replace lost fluids with plenty of liquids. If you have a severe case, you may require hospitalization and intravenous fluids.

if you think you are sick with gastroenteritis: