Questions, comments and suggestions regarding this debrief are most welcome and can be sent to Sheikh.Qadar@umanitoba.ca.

Questions addressed in this Debrief:

What are important characteristics of Lyme disease?

Lyme disease is a bacterial infection caused by Borrelia burgdorferi. It spread through the bite of infected ticks. Ticks attach to any part of the human body but are often found in hard-to-see areas. In most cases, the tick must be attached for at least 24 hours before Lyme disease can be transmitted.

Most humans are infected through the bites of immature ticks called nymphs. Nymphs are tinny (less than 2 mm).

c) In the case of Late Lyme disease (more than 3 months), if it remains untreated, it can last for months and years. Musculoskeletal symptoms could develop such as Baker’s cyst, chronic arthritis, asymetric oligoarticular arthritis (usually affecting knees), transient, migratory arthritis and effusion in one or multiple joints. Neurological symptoms may also be observed such as: subacute mild encephalopathy, affecting memory & concentration, chronic mild axonal polyneuropathy, manifested as distal paresthesias, radicular pain (less common), some rare ones include encephalomyelitis & leukoencephalopathy.

Only IgG testing should be performed (not IgM) on patients with Lyme disease for over a month.

Serological tests should not be performed as a test of cure & cannot be used to measure treatment response. 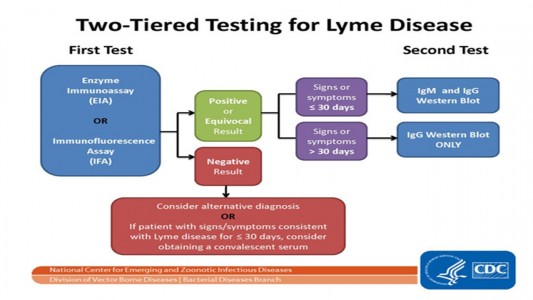 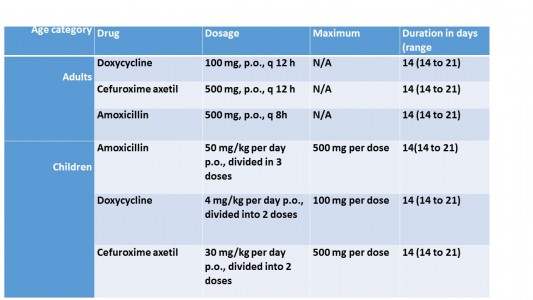 Doxycycline is contraindicated for children less than 8 years old and for pregnant or lactating mothers so the drug of choice is Amoxicillin in this case.
In cases where these are not drug of choice, patients are recommended to use macrolide (azithromycin, erythromycin, clarithromycin).

The best prevention strategy is to protect against tick bites, as there is no human vaccine currently available against Lyme disease.
Lyme disease is not a contagious disease however, people with active Lyme disease should not donate blood as it can a medium of transportation.

What is happening with current outbreak of Lyme disease?

Government of Canada statistics below indicate an increase in reported cases over the eight-year period from 2009 -2016. 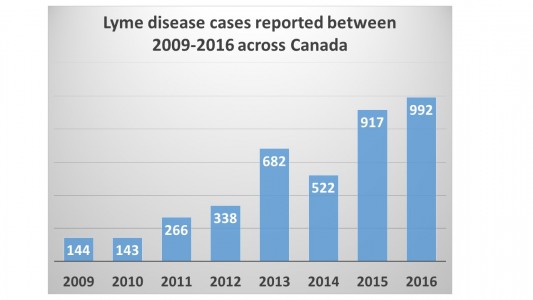 Government of Canada-Surveillance of Lyme disease

The map below shows the geographic areas where the risk from tick bites and Lyme disease is known to occur and are called the “risk areas”. 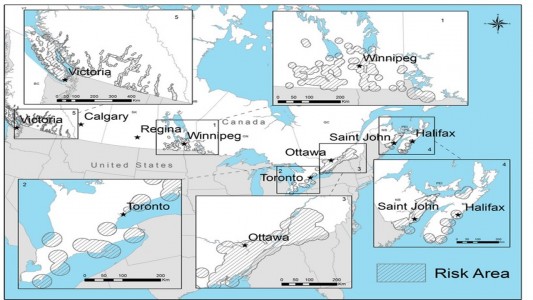 Government of Canada-Risk of Lyme disease to Canadians

Case have more than doubled in just a year’s time. In, 2017 about 987 total cases of Lyme disease were reported in the province compared to only 388 cases in 2016.
Recently, Public Health Ontario has issued estimated risk areas (geographic communities) for 2018, which can assist local public health units as they conduct Lyme disease case investigations.

About eight laboratory confirmed cases of Lyme disease were reported in 2016.

In years, 2015 and 2016, 14 and 10 Lyme disease cases were reported in Alberta, respectively. All were cases acquired from other provinces where the disease is prevalent.

What is the current risk for Canadians from Lyme disease?

Government of Canada-Risk of Lyme disease to Canadians

What measures should be taken for a suspected Lyme case or contact?

The Government of Canada has developed brief guidelines to help healthcare providers in the management and treatment of Lyme disease infection. These include signs, symptoms, diagnosis, laboratory testing, surveillance, prophylaxis, treatment.

Government of Canada and provincial authorities have laid out guidance to prevent infection from Lyme disease.

Government of Canada-Prevention of Lyme disease