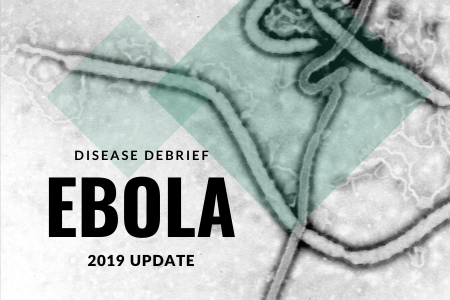 UPDATE OF SEPTEMBER 19, 2019 : Please, read the STATEMENT FROM CDC REGARDING DEMOCRATIC REPUBLIC OF CONGO (DRC) DECLARATION ON OFFICIAL END OF NINTH EBOLA OUTBREAK

NCCID Disease Debriefs provide Canadian public health practitioners and clinicians with up-to-date reviews of essential information on prominent infectious diseases for Canadian public health practice. While not a formal literature review, information is gathered from key sources including peer reviewed literature, the Public Health Agency of Canada (PHAC), the USA Centers for Disease Control and Prevention (CDC) and the World Health Organization (WHO).

Questions, comments and suggestions regarding this debrief are most welcome and can be sent to nccid@umanitoba.ca

What is the current risk for Canadians from EVD?

Although it is quite possible that a person could arrive in Canada from an EVD affected country during the incubation period or after the onset of symptoms, the risk for Canadians is considered very low at this time. No case has ever been reported in Canada. The last WHO risk assessment, carried out on 5 August 2019, concluded that global risk levels remain low.

The Government of Canada provides relevant information to the Canadian public and travelers. Canada has protocols and resources to detect, investigate, and manage Ebola cases if it were ever to appear in the country. As of July 22, 2019 Ebola virus disease in DRC is at level 2 risk due to an outbreak that is only in limited geographic areas (see What is happening in the 2018-2019 outbreak?). While the Government of Canada recommends that Canadians avoid all non-essential travel to DRC due to current political instability and security risks, the WHO advises against travel restrictions to the DRC based on the current EVD outbreak. Canadian travelers to DRC are therefore advised to practice special health precautions.

What measures should be taken for a suspected EVD case or contact?

Health professionals in Canada are advised to be vigilant in the recognition, reporting, and prompt investigation of patients with a history of potential exposure to Ebola, and symptoms of EVD or similar diseases that can cause viral hemorrhagic fevers. Below you will find guidelines for public health management, infection prevention and control, clinical care, monitoring of travelers, testing, and reporting.

The Government of Canada and all provincial and territorial jurisdictions have case definitions for reporting purposes.

A specific EVD outbreak case definition was developed during the 2014-2016 West-Africa outbreak.

The Government of Canada has developed guidance for public health management in the event that a human case of EVD or a close contact of an EVD case is identified. The WHO has developed other resources applicable to the Canadian context. Clinicians should also review applicable provincial/territorial guidance if they have been developed.

Patients under investigation for Ebola virus disease must be immediately reported as per national and jurisdictional protocols.

The Committee to Advise on Tropical Medicine and Travel (CATMAT) has developed interim recommendations for Canadians regarding preventive measures, and the monitoring and surveillance of travelers arriving from EVD affected areas.

Ebola viral cultures can only be done at the National Microbiology Laboratory (NML) containment Level 4 laboratory. If a sample requires diagnostic testing for EVD, health professionals and laboratories should liaise with their provincial public health laboratory to coordinate with the NML.

Ebola clinical care guidelines for clinicians in Canada have been developed. Additionally, several guidance documents on clinical care and case management are available from the WHO.

The Government of Canada, the WHO, and the CDC have issued guidelines on IPC measures to be undertaken in a health care setting, including measures for environmental cleaning, and linen and waste management. The Government of Canada also provides guidelines on IPC measures for Pre-hospital care and ground transport of patients with suspected or confirmed EVD.

IPC and environmental sanitation guidance has been developed for passenger conveyances and terminals, as well as airline cabin crews, cleaning, and cargo personnel. Some provincial/territorial jurisdictions have developed their own guidelines for IPC measures.

On 8 May 2018, an outbreak of Ebola virus disease (EVD) was announced by the Ministry of Health of the Democratic Republic of the Congo in Bikoro Health Zone, Equateur Province. As of 8 August 2019, a total of 2781 EVD cases were reported, including 2687 confirmed and 94 probable cases, of which 1866 cases died (overall case fatality ratio 67%). Of the total confirmed and probable cases, 56% (1572) were female, and 28% (791) were children aged less than 18 years. Three imported cases were reported in Uganda in June 2019, and there is a continued risk of spread to other neighbouring countries.

What else should I know about Ebola virus disease (EVD)?

Ebola Virus Disease (EVD) is caused by a virus within the genus Ebolavirus. Four strains of the virus (Ebola, Sudan, Taï Forest, and Bundibugyo) have been known to cause EVD in humans. The disease is rare and deadly, most commonly affecting people and nonhuman primates (monkeys, gorillas, and chimpanzees).

Typical symptoms include: sudden onset of fever, intense weakness, muscle pain, headache and sore throat, followed by vomiting, diarrhea, rash, impaired kidney and liver function, multiple organ failure, vascular manifestations (conjunctival injection, postural hypotension, edema), neurological signs (headache, confusion, coma) and in some cases, internal and external bleeding. Patients who present with these symptoms and signs should be isolated according to protocol, and then assessed to determine their risk of exposure to Ebola virus. Symptoms can begin 2 to 21 days after exposure, with an average of 8 to 10 days.

Case fatality of diagnosed cases has been 30–90%. The average case fatality rate is about 50%.

EVD is generally limited geographically, occurring primarily in outbreak-prone areas of sub-Saharan Africa. Historically, between 1976 and 2012, sporadic cases and outbreaks of EVD were reported in several African countries. The largest recorded outbreak to date occurred from 2014-2016 in West Africa, with some imported cases appearing in other countries in Africa, Europe and North America. It resulted in over 28,500 cases and 11,300 deaths.

The ongoing 2018-2019 outbreak in the Democratic Republic of the Congo is highly complex and is the second largest Ebola outbreak on record (see: What is happening in the 2018-2019 EVD?”). Please read the statement from WHO declaring the Ebola outbreak in Congo a Public Health Emergency of International Concern .

To date, no cases of EVD have ever been identified in Canada. (See below: What is the current risk for Canadians from EVD outbreak?”).

The EVD resevoir is unconfirmed, but considered most likely to be fruit bats (Pteropodidae). Ebola is introduced into the human population through the close contact with the blood, organs, secretions, or other bodily fluids of infected animals such as chimpanzees, gorillas, fruit bats, monkeys, forest antelope and porcupines found ill or dead in the rainforest.

The virus spreads from person to person via broken skin or mucous membranes (eyes, nose or mouth) through direct, unprotected contact with:

Transmission can also occur from animal-to-person through direct, unprotected contact with infected fruit bats or nonhuman primates (such as apes and monkeys).

The virus can remain in certain bodily fluids (including semen) of a patient who has recovered from EVD, even if they no longer have symptoms of severe illness. The risks of sexual transmission, however, are not well understood or confirmed. According to the World Health Organization, the most infectious body fluids are blood, feces, and vomit. Virus on surfaces may remain infectious from hours to days.

During an outbreak, those at higher risk of infection are:

Patients become contagious once they begin to show symptoms; they are not thought to be contagious during the incubation period. The case remains communicable as long as the blood and body fluids (including seminal fluid and breastmilk) contain the virus. This includes the post-mortem period.

Laboratory methods for confirming a case of EVD are based on isolation of the virus, detection of its RNA or components, and/or demonstration of antibodies against it. Ebola virus can be detected in the blood of an infected person three days after symptom onset by reverse-transcription polymerase chain reaction (RT-PCR)

The WHO describes (and has evaluated) several diagnostic methods used to confirm Ebola virus infection.

Currently, there is no specific licensed treatment for Ebola. Patients are treated for their symptoms with supportive care. Some people are able to recover without treatment. The sooner the patient gets supportive care, the better their chances for recovery. Generally, treatment includes:

A multi-drug randomized control trial began in November 2018 in DRC, and is now moving forward into an extension phase of the study with only two drugs, REGN-EB3 and mAb114. The two monoclonal antibody drugs, significantly outperformed the other two drugs tested (Zmapp and Remdesevir), and as of August 9, 2019, will be the only two drugs administered to patients.

In areas where Ebola is present, the current most important preventive strategies are: 1) implementation of infection prevention and control measures in health care settings; 2) public education with respect to reducing exposure to reservoir sources, ill people and their bodily fluids, and corpses in community settings; and 3) vaccination.

Individuals should continue to protect themselves from infection by not touching live or dead infected patients, or their body fluids such as blood, vomit, saliva, urine or feces. Even personal items can transmit the virus. Health workers should follow specific guidelines for infection control (See: What public health measures should be taken for a suspected EVD case or contact?)

RVSV-ZEBOV, an investigational vaccine discovered by researchers at Canada’s National Microbiology Laboratory, is considered safe and protective against the Zaire strain of the Ebola virus.  Immunization with the vaccine is recommended only in countries experiencing an Ebola outbreak, as the vaccine is not currently licensed. The rVSV-ZEBOV vaccine is being administered in the ongoing 2018-2019 Ebola outbreak in DRC.